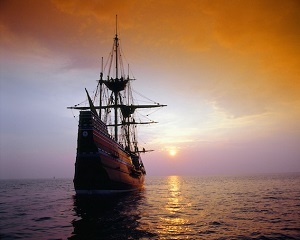 Southampton was one of 12 partners delivering Mayflower 400 – an international programme of cultural and heritage activities in the UK, US and Netherlands inspired by the 400th anniversary of the ship’s sailing and successful settlement in the US. The Mayflower and her sister ship, Speedwell, set sail from West Quay, Southampton, on 15 August 1620, carrying 102 passengers.

They settled in what had been the Native American village of Patuxet. The village had been abandoned by the Wampanaog people who lived there after the death of the majority of its inhabitants in a ‘great plague’ (1616 – 1619), brought by English and European invaders.

In Southampton we approached the anniversary through the lens of migration. The Mayflower is one of many thousands of migrant, transmigrant and refuge ships that have left from or arrived in Southampton during the past seven centuries. As a result, 148 languages are currently spoken in the city. The anniversary was an opportunity to reveal this rich and diverse history, and to encourage communities to tell their stories, many of which will have previously been hidden

You can read about the wider international programme on: https://www.mayflower400uk.org

Mayflower 400 was due to run throughout 2020, but due to the Coronavirus Covid-19 pandemic, experienced delays and extensions through into 2021.
In Southampton, the programme launched in March 2020 with 1000 young people taking part in Southampton Music Hub’s, A Musical Odyssey, presented in partnership with Mayflower Theatre. There was then a pause during lockdown, but picked up again in time for the August 2020 anniversary and ran through till June 2021.

Partners across Southampton delivered an innovative and inclusive programme that used the anniversary as a means to creatively explore the City’s wider and longer history as a marine city and gateway to the world. It invited us to look at who we were, who we are, how our city has grown and to re-think our cultural and maritime future.

For more information on the National Programme click here >

For more up to date information visit the Mayflower400 Southampton website

Discover some of the events that took place in Southampton that were linked to the sailing of the Mayflower and Speedwell ships in 1620. Entry is free, but you will need to book due to limited capacity, please email info@seesouthampton.co.uk.

Launched on November 26th, Thanksgiving day 2020, Giving Thanks is a new campaign to create digital memories that bring the people of Southampton together in a shared celebration of our city and our communities.

It is delivered as part of the on-going city-wide Mayflower 400 programme and aims to not just mark the anniversary, but to bring people together as best we can in these days of social isolation, through generating an understanding of difference and encouraging an attitude of gratitude.

The public are asked to share, through social media and using #MyGivingThanks, photos, images, videos, stories, poems of the things for which they are grateful; maybe that’s their pets, their parents, or their local park. There are online activity packs available to help communities, families and businesses get involved. The scheme will be open until Valentine’s Day 2021 and is supported by the Barker-Mill Foundation.

As part of the #MyGivingThanks campaign GO! Southampton, in collaboration with City Eye, has produced a series of short films which put a spotlight of some of the key workers who have contributed Southampton in response to the pandemic. You can read more about their contribution here.