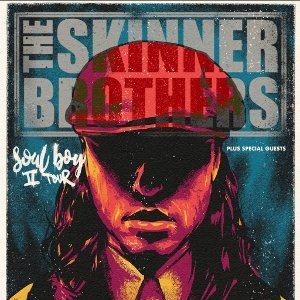 The Skinner Brothers is an English indie rock band based in London.

Steve Lamacq interviewed The Skinner Brothers on BBC Radio 6 Music as Artist Spotlight and has featured the world premieres of the band's tracks Low, Iconic and Jericho Star. John Kennedy (radio broadcaster) has also featured Iconic on RadioX. On TV, Low has featured in The Syndicate on BBC One and Iconic in BBC One's Football Focus.

The band has toured the UK with The Libertines and has supported Rat Boy and Mike Skinner and The Streets.. In Autumn 2021, The Skinner Brothers will tour as main support for Kasabian on the band's UK arena tour. The Skinner Brothers have played festivals including Neighbourhood Weekender where they headlined the Viola Beach stage and Isle of Wight Festival. In 2022, the band will play with The Music, The Cribs, The Coral and The Snuts at Temple Newsam Park in Leeds