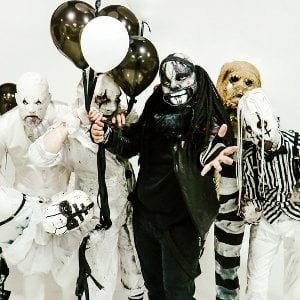 The likes of Rob Zombie, Alice Cooper, FNM, Ghost and Mr Bungle have played a part in shaping
who the Injester are.
The band’s debut music is a metallic mix of horror, theatre and tales for all mankind.
Under their previous personas, The Injester have played some of metal’s biggest stages. Performing
at Download, Bloodstock, Hellfest, Wacken, Hammerfest, Hard Rock Hell and many other festivals
and tours. This moulded them into what they have become. The Injester made their live debut at
Hammerfest in the UK in 2019 alongside Paradise Lost with Hard Rock Hell Magazine saying,
‘Saturday afternoon saw The Injester make their debut and I’m not sure we’ll be the same again!’.
The band subsequently went on to return to the scene ‘post covid’ with a packed performance at
the New Blood Stage of Bloodstock 2021.
Already announced for Download Festival in 2022, and with their debut full length album to be
released shortly - there’s much more of the story to come....