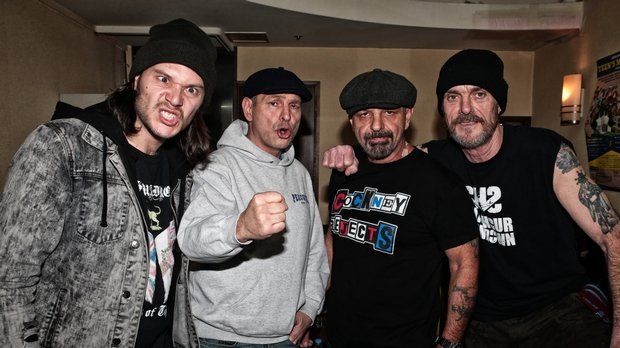 Cockney Rejects were formed in the late seventies in East London as an answer to the art school punk that had dominated the scene up until then.

Fiercely working class in stance and attitude, the band shunned the political ramblings of punk’s first wave and sang about the circumstances that surrounded them. Spotted by Sham 69's Jimmy Pursey and signed by EMI after playing four local gigs they found themselves playing sell out tours the length and breadth of the UK and seeing their debut album storm the charts.

After a short break, the band returned to the live circuit in 2000, playing to hundreds of thousands of people across the globe with a live set that is so energetic that it has to be seen to be believed. With the fractionalization of the late ‘70’s and early ‘80’s now gone for good, with every gig becoming a party for fans and band alike, the Cockney Rejects go from strength to strength.