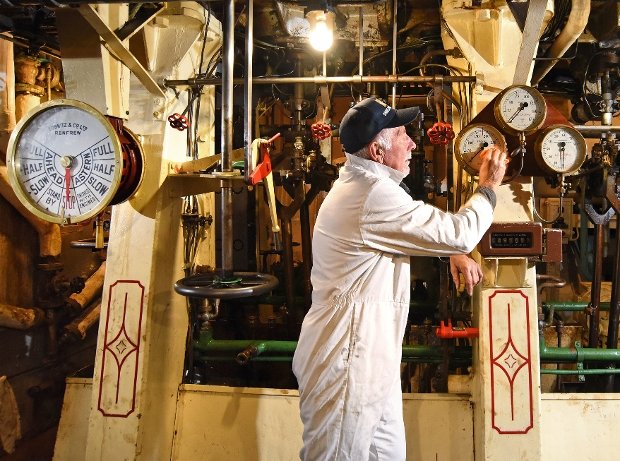 The RMS Titanic was launched in Belfast on the 31 May, 1911. Join us as Shieldhall steams down Southampton Water towards the Solent, and learn about Southampton’s links with the RMS Titanic. Hear about the New York incident that nearly resulted in a collision in Southampton Water between the Titanic and the SS New York, and of the fate of the Southampton crew after her collision with the iceberg. We will welcome guest speakers and Titanic experts on board. On our return to berth get close to the departing cruise ships Celebrity Silhouette and MSC Magnifica, always the cue to sound our whistle and play the ‘Shieldhall Organ’!

As part of your cruise, see the impressive engine room with its original steam engines at work and the bridge, with its traditional instruments and gleaming brasswork; admire the ship’s steam assisted steering gear (similar to that used on Titanic); talk to the Captain and our volunteer crew; listen to the informed commentary on the sights and sounds of Southampton Water and The Solent; pass close to the great ocean liners and container ships; walk the teak decks; relax in the Saloon with a wide range of refreshments including tea / coffee; real ale; a range of Titanic bottled beers; wine and hot and cold food, available on all trips.

Children will have fun with our interactive Shieldhall Passport, collecting stickers from various stations on board!

To watch a video showing how Shieldhall is considered a ‘Titanic in Miniature’ due to her triple expansion steam engines and boilers, and to hear an interview with Chief Engineer Graham Mackenzie, please visit the Shieldhall website.