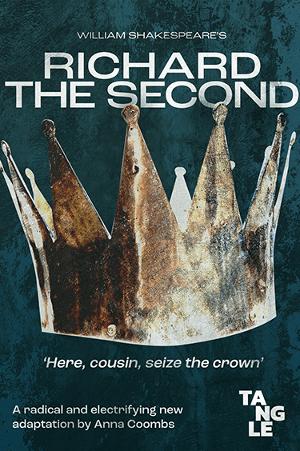 A nation is in turmoil. Three first cousins – Richard, Aumerle and Henry – battle for the supreme position of authority. Who will succeed in saving their country from a trail of ultimate destruction? And who will survive the challenge for the throne?

Tangle’s unique interpretation of one of the most compelling of Shakespeare’s history plays, exploring the politics of power and family alliances, will be performed by a multi-skilled ensemble of five. With an original score of Zimbabwean music and song, this new multicultural production offers a fast, powerful and fresh take on this state of the nation play, while celebrating talented artists whose multi-national voices are at the centre of Tangle’s work.

Tangle’s touring productions, Discovery projects, and artist development schemes, including KUKURA and technical development scheme AMPLIFY, provide a vital access point for diverse and often isolated communities, artists and audiences to come together. Tangle has a particular specialism of touring to and working in rural areas that have, historically, seen little multicultural representation.

2 hours including an interval
12+