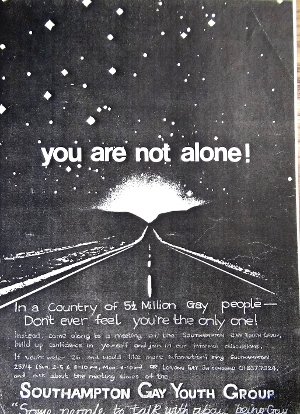 Aspects of Southampton’s LGBT+ history: uncovering a largely hidden past.

LGBT+ (Lesbian, Gay, Bisexual, Trans +) history is sometimes referred to as a hidden history. This is because so much history went unrecorded or was erased at a time when being lesbian, gay, bisexual or trans (LGBT) was seen as sinful, shameful and even criminal. It is only in very recent times, largely since the 1960s, that some people have made great efforts to record what was previously missing from many history books and archives.

Dr Clifford Williams has delved extensively into the archives to unearth some of Southampton’s LGBT+ history. Learn about the gay Southampton barber who ended up being recorded in a pamphlet written by a condemned man in 1750; hear about the year the city council welcomed the Campaign for Homosexual Equality Conference after other cities and towns refused them a venue; discover how, compared to Portsmouth and much of the UK, Southampton in the mid 1970s was generally a good place to be gay/lesbian. The talk will look at some of the documents and photographs associated with the city’s LGBT+ past.

Dr Clifford Williams is an author and researcher. His books include A history of women policing Hampshire and the Isle of Wight 1915-2016 (HCHS 2016) and Courage to Be: Organised gay youth in England 1967-1990 (The Book Guild Ltd. 2021 (forthcoming)). He is currently researching a book on policing gay and bisexual men 1950-2010.

Please help support us by choosing how much you are happy to pay for this session. While all ticket buyers will receive the same level of service, your generosity would be a great help in making sure these events are affordable for all.

Clear instructions and details for how to log in to this talk will be emailed on purchase. Tickets are required for each device being used to access the event. Tickets are non-refundable, unless the event is cancelled by the organiser.