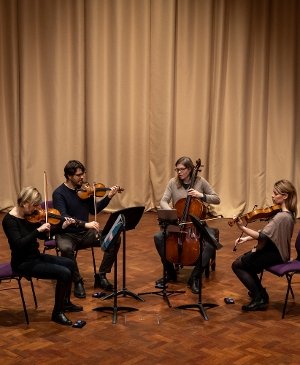 To round off their first year as Associate Artists the Chiaroscuro are joined by a celebrated special guest. Award winning French pianist Cédric Tiberghien is renowned for his solo recitals and his chamber collaborations, in particular his longstanding partnership with the Chiaroscuro’s first violinist Alina Ibragimova. This evening, performing on fortepiano, Cédric joins the quartet for two of the concertos which Mozart wrote in Vienna in 1782, and which the composer described in a letter to his father as ‘a happy medium between too heavy and too light. They are very brilliant, pleasing to the ear, and natural, without being insipid’. The concert opens with the sole complete portion of a planned quartet which Schubert abandoned. Published for the first time in 1870, more than forty years after his death, it has become one of the composer’s most popular works.