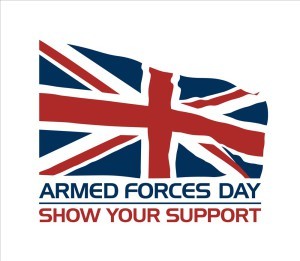 Armed Forces Week and Day is a chance to show your support for the men and women who make up the Armed Forces community, from currently serving troops to Service families, veterans, reservists and cadets.

Although we aren’t able to have our usual Armed Forces Day Parade due to government social distancing guidelines there are many ways that people, communities and organisations from across Southampton can show their support throughout the week and get involved.

Flag Raising Ceremony - Monday 22 June 11am
A representative from 165 Port Regiment Royal Logistic Corps joined the Right Worshipful Mayor of Southampton, Councillor Susan Blatchford and her Chaplain for a flag raising ceremony at the Civic Centre. 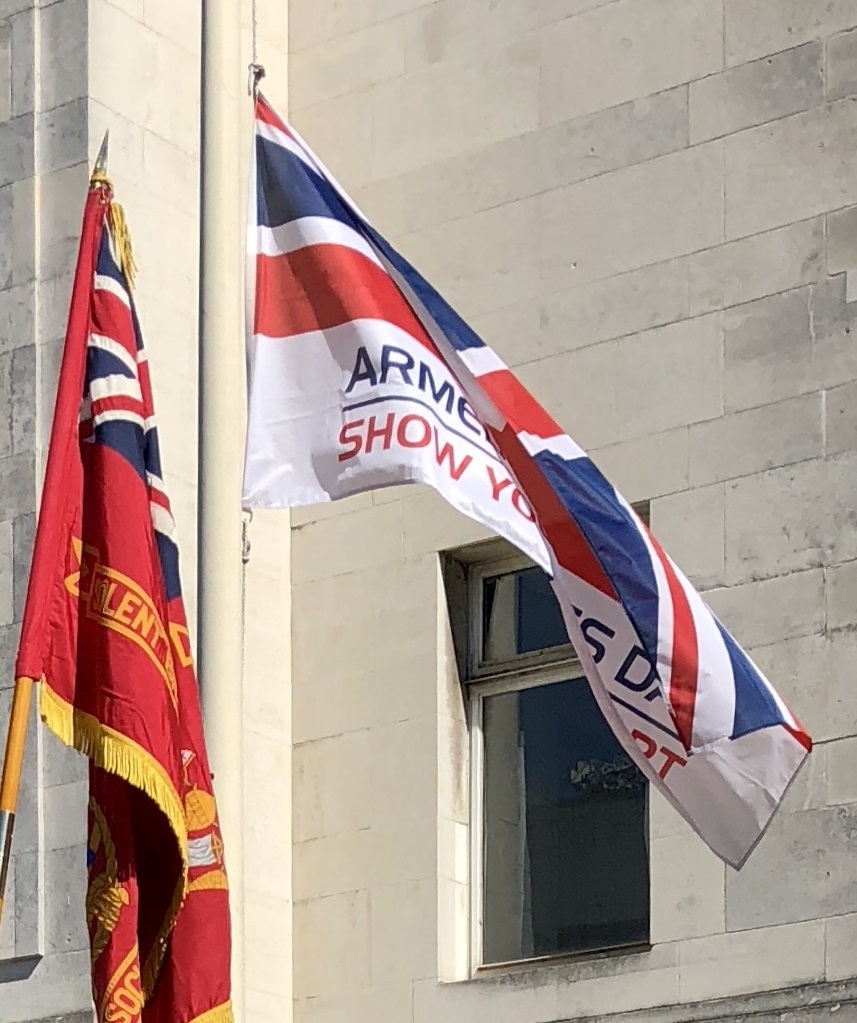 The reserve unit at Blighmont Reserves Centre, Millbrook, have teamed up with Southampton City Council to create a short film about what it means to be an armed forces reserve which will be premiered on the council’s social media channels on the day.

Southampton Military History
Discover amazing local military history from the council’s Cultural Services team over at @SeaCityMuseum and @SouthamptonStories on Facebook and Twitter.

They will be sharing some fascinating stories and images from the Southampton Stories exhibition at SeaCity Museum though the week, such as the story of a young sailor who won a Victoria Cross for his brave action in July 1940.

Armed Forces Day – ‘Southampton Supports’
Residents and Businesses are encouraged to fly the armed forces flag, bunting or banners on Armed Forces Day on Saturday 27 June.  Share your photos of your decorations and you saluting using the hashtag #SouthamptonSupports, #ShowYourSupport and #SaluteOurArmedForces, and we’ll share it on our social media channels. 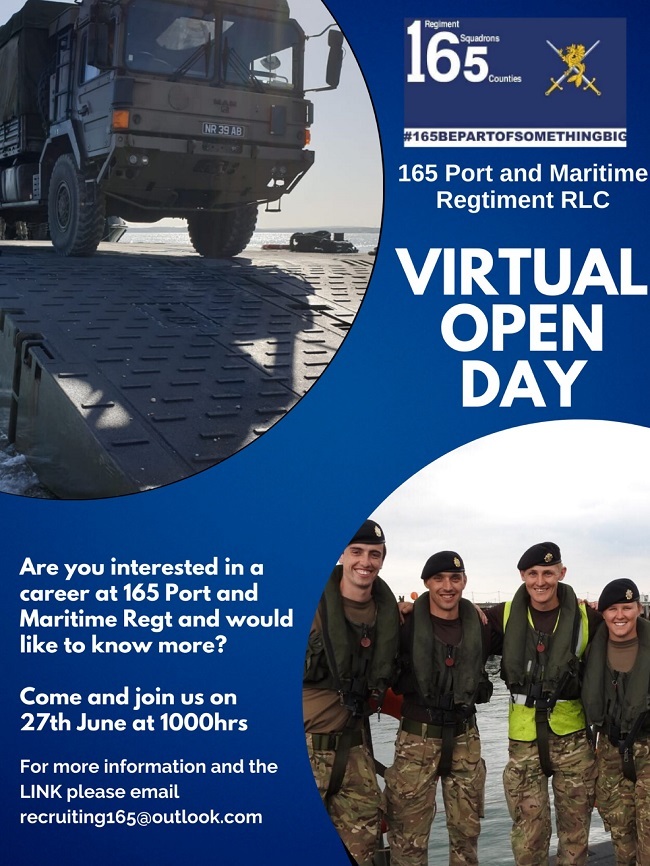 The 165 Port and Maritime Regt RLC specialise in moving stores, equipment and vehicles from ship to shore and road to rail, utilising their fleet of landing craft, vessels and vehicles. They we also provide the vital role of Operational hygiene. They deliver all these capabilities wherever they are needed whether that’s in the UK, Europe, Canada or the Caribbean.

Are you interested in a career at 165 Port and Maritime Regiment and would you like to know more?

They will give you the opportunity to do something different whilst getting paid to train in your spare time. Learn new skills, specialist qualifications, meet new friends and earn an annual tax-free Reserve commitment bonus of up to £1862. Whats stopping you?

Join them on their virtual open day at 10am on Saturday 27 June, email recruiting165@outlook.com for the link

The whole of Southampton 02 Guildhall will be lit in Red, White and Blue for the week from Monday 22 June, in honour of the cities armed forces community. 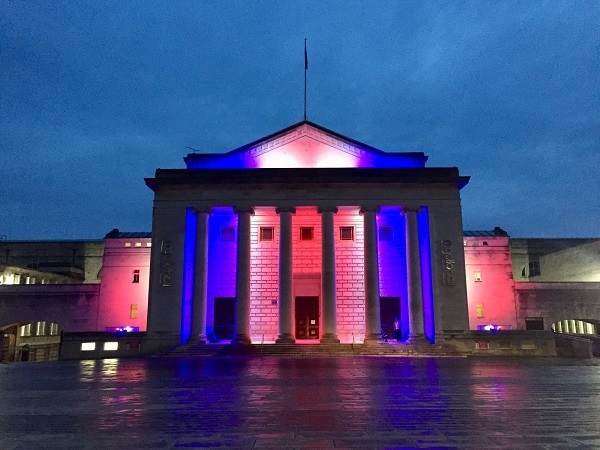 “Southampton is steeped in armed forces history, from being the home of the spitfire to having a world-renowned port that was used in both world wars. The city’s annual Armed Forces Day Festival that attracts thousands unfortunately will not be possible this year; nonetheless, activities for Armed Forces Week and Day will build on our virtual activities that took place for the 75th Anniversary of VE Day in May, which saw many within our local communities celebrate our amazing armed forces and military history from home. This is an opportunity to show our support and recognition to those that have, and continue to, fight for peace and our freedom.”

Local support for veterans and the armed forces community can be found here:
• Solent Armed Forces Covenant - Bringing together four local authorities (Southampton City Council, Portsmouth City Council, Gosport Borough Council and Isle of Wight Council), local health services, local military, voluntary sector and business partners. The Armed Forces Covenant is a promise that those who serve or have served in the British military and their families will not be disadvantaged by their service.
• Veterans’ drop-ins - There are drop-in centres across the region offering advice and information to armed forces veterans and their families. They provide social support and access to a range of welfare and mental health services. They are open to former members of the British Armed Forces and Reserves and their direct family members, including the Royal Fleet Auxillary and the Merchant Navy. Support is available at Southampton Drop-in-Centre every Monday, Wednesday and Friday afternoon, 14:00-21:00. Contact: 023 8044 6032
• Armed Forces and Veterans Breakfast Clubs - The Snack Shack, Obelisk Road Woolston - Tuesday, Thursday and Saturdays 10:00-12:00. Contact: 023 80444463
• Veterans' Gateway - is a single point of contact for veterans seeking support with their 24hr helpline. Many of their team are veterans themselves so they understand the issues that people face after leaving the Armed Forces. They work with people on a one-to-one basis, connecting them with the right support as soon as possible. Telephone: 0808 802 1212 Text: 81212
• Defence Discount Privilege Card - Defence Discount Service provides those in the Armed Forces, Veterans and the Defence Community with discounts both online and in store.

Southampton City Council was awarded Silver by the Defence Employer Recognition Scheme in 2018, in recognition of our values aligning with the Armed Forces Covenant and the support given to the defence and armed forces community.

Faculty are a design and branding agency that help businesses stand out.